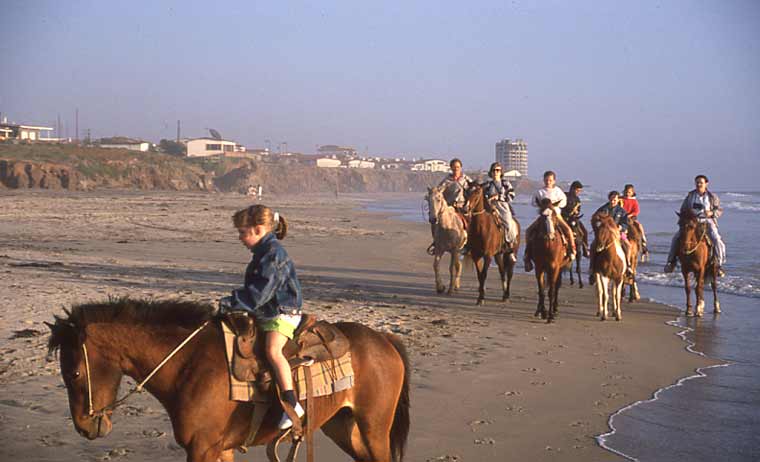 ROSARITO BEACH, Mexico — Bienvenidos says the sign as you drive through the bougainvillea covered arches of the hotel’s entrance. It means welcome.

Above the front doorway is a stained-glass window of a beautiful dark-haired woman festively posed with her guitar in those bright, vivid colors that seem to say “Mexico.”

The resort has been visited by kings, presidents, motion picture celebrities, famous and infamous politicians. In 1955, Prince Ali Khan, actress Gene Tierney and their 24-person entourage stayed for weeks, taking over all the hotel’s bungalows.

Paulette Goddard and Burgess Meredith were married there, and even Marilyn Monroe was one of the frequent guests seen lounging poolside.

The setting is the 50-year-old Rosarito Beach Hotel, located in northern Baja California, 18 miles south of the Mexican-American border at San Diego.

Of the millions of San Diego’s annual visitors, approximately 25 percent cross the border into Tijuana for a day visit. Unfortunately, very few of these day-trippers know enough about the area to feel comfortable venturing beyond T.J., as the city is affectionately called north of the border.

A mere rancheria in the early 1930s, the town of Rosarito Beach was founded because of the hotel whose name it bears. Since that time, the hotel has been through its ups and downs. After recent renovations, however, it’s again becoming the jewel it once was.

Directions to the Rosarito Beach Hotel are simple. After crossing the international border into Tijuana, follow the “Ensenada Cuota” or “Ensenada Toll Road” signs.

The road is much like an American toll road. The four-lane divided highway has periodic toll booths, which accept U.S. coins as eagerly as pesos. From the toll road, take the second Rosarito exit to the white-arched entrance displaying the hotel’s name.

A leisurely stroll through the Rosarito Beach Hotel’s blue-and-white-tiled lobby allows time to enjoy the commanding floor-to-ceiling painted murals. The artist’s signature is visible, along with his brief statement in Spanish that translates: “Through these halls passed and here decorated Matias Santoyo.”

As a hotel staffer shared with admirers, what artist Santoyo failed to say in his “statement” is that painting the murals occupied more than two years of his life — though his dedication is obvious in the considerable detail of his workmanship.

Offering simultaneous views of the Olympic-size pool and the Pacific Ocean, the hotel’s Beachcomber Bar provides pure relaxation. Situated in the middle of this glass and polished wood environment, a local pianist entertains patrons with south-of-the-border favorites, encouraging sing-alongs if the mood strikes.

While sipping margaritas and nibbling appetizers — from fresh cerviche to the more traditional guacamole and crispy Mexican chips — guests become completely entranced by the constant roll of the nearby ocean’s tide.

If the deep navy blue water beckons, the more energetic visitor can conveniently take the back steps from the bar down to the beach for a solitary stroll, perhaps sidestepping a sand castle or two.

There are no rigid rules to follow. And there is no rush. After all, this is Mexico.

Those wanting to enjoy the beach from a different perspective might opt for a horseback ride along the water’s edge (negotiated for as little as $3).

A two-year old could toddle as fast as these horses casually meander down the beach, but the gentle sea breeze is nevertheless intoxicating. Once heading home, however, the horses pick up a sudden burst of energy and provide an invigorating finale to the ride.

Although the town was originally inhabited because of the hotel, it is now populated with more than 40,000 residents and has become known for its restaurants and shopping, as well as for its famed landmark.

To experience more of Rosarito Beach, pass again through the hotel’s arched entrance and continue south through town on the “free” road, designated as “Libre.”

You will notice many restaurants, several of which have been cleverly Americanized. Though far from a Japanese environment, the little Mexican town boasts a Benihana de Rosarito.

And, reminiscent of Hollywood, there is the Derby Restaurant, recognizable from the road because of the oversized brown derby hat at its entrance. According to a tip from a local, the Derby has become a favorite of the Mexicans and local Americans living in town.

The road continues past a variety of shops, each offering the same unique and reasonable shopping as Tijuana but at even lower prices.

Custom furniture stores are easily distinguished by samples of their wrought iron and expertly carved wood furniture — many times cleverly displayed on store rooftops or balconies.

Less-expensive souvenirs can be found in the numerous T-shirt shops lining each side of the street.

And then there are open air pottery shops. Shoppers can find a tall, bright yellow vase as easily as a terra cotta sombrero-clad hombre fireplace. Here, amid pottery of any shape, size and color, a visitor can get the real feel of the country and of a favorite pastime — bargaining.

Prices normally are fixed at department stores and in larger shops. But bargaining is the name of the game in many of these smaller establishments. Although the practice seems a bit awkward at first, it helps the first-time negotiator to remember that the originally quoted price is substantially marked up and bargaining is good-naturedly expected by the Mexicans.

More importantly, the custom is a source of great fun for everyone involved. “Señora, por favor, more for your friend, Fidel,” cheerfully translates as, “Please, that’s my best price.”

Because of the prices, however, it isn’t difficult to buy far more pottery, baskets and even furniture than most cars can accommodate.

\In one such instance, the helpful shop owner solved the dilemma by making one additional sale — a large basket he tied on top of the car. This basket was not only large enough to carry all the original purchases, but much more.

Exactly five miles south of the Rosarito Beach Hotel is a restaurant-bar named Calafia. It’s important to watch the car’s odometer because the entrance, though marked, is nondescript. It’s a bumpy, stone road that winds through a trailer park.

Nestled on the edge of the trailer park, however, is Calafia — a true discovery. Perched high on a cliff jutting into the ocean, the establishment has an indoor dining room. But its pieces de resistance are its many terraces, carefully positioned like the steps of an erratic ladder, and offering a variety of choices.

Atop the restaurant’s highest terrace, guests dine on white linen tablecloths and enjoy a range of succulent food fare — from giant stuffed shrimp and filet mignon to the more expected Mexican specialties of carne asada and chile rellenos.

If dinner is out and it’s simply drinks and appetizers, there are two possibilities. The selection is between the more isolated terraces decorated with white wicker tables and chairs or those adorned with brightly painted picnic tables that almost shake to the beat of disco music provided by large speakers below.

Regardless of the heat during the day, once the sun sets on the Pacific Coast, a chill permeates the air. Before sunset, it’s time to locate a cozy spot for dinner.

Returning toward Tijuana on the toll road marked “Cuota,” exit at San Antonio Del Mar (five miles north of Rosarito Beach). One last stop, La Costa Restaurant, will provide that warm respite and a memorable ending to a day in Mexico.

Upon entering the seaside restaurant, intricate models of ships, blue table linens and ship wheels used as ceiling hangings help create the nautical theme. The fire roars in the oversized copper fireplace situated conspicuously in the corner of the room as if to provide a dramatic focal point.

But, until dark, it’s the large windows spanning the length of the room that yield the drama — an incomparable view of the sunset, as if the entire scene were splashed with luminous water colors.

The menu only complements the evening with its abundance of choices. But as one quickly discovers in most Baja restaurants, the region’s fresh seafood is not to be missed.

At the end of the meal, while lazily sipping Mexican coffee and reflecting on the unique day, it’s easy to understand the meaning of the slogan seen just before crossing the border: “So Near and Yet So Foreign.”

Tourist cards: U.S. citizens may cross the Mexican border and remain up to 72 hours without a tourist card. However, those traveling farther south than Maneadero (just south of Ensenada) or into mainland Mexico will need a tourist card.

Automobile insurance: Purchase of special automobile insurance is not mandatory for the U.S. driver in Mexico, but it is certainly recommended, as American coverage is not valid across the border. If you are involved in an accident and without a valid Mexican policy, you may be detained until you can show proof of your ability to pay for any cost incurred. One-day coverage is inexpensive and can be bought at various locations on the U.S. side of the border.

Shopping: U.S. citizens may bring back up to $800 worth of duty-free merchandise, including one liter of liquor (if age 21 or older). U.S. Customs allows you to purchase imports, furniture, pottery, leather items, etc. Many foods are not allowed, but those which are permitted include Mexican salsas, fresh ground coffee and bolilos (Mexican-made “French” rolls).